Drink Up! I Hope It's Good. 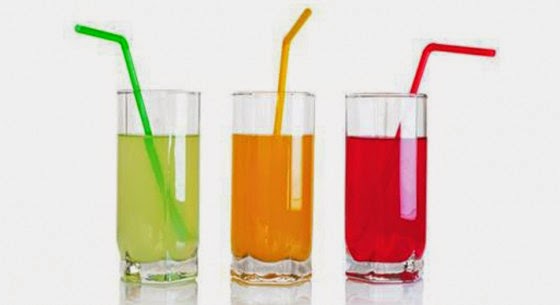 But God had other plans.

For whatever reason He has chosen to use me in a way that I never imagined possible.  I have been tapped on the shoulder and asked to speak for those that feel they have no voice – so that’s what I do.

My messages are always simple.  Survival.  Belief.  And triumph.  That’s it.  You have to figure out a way to believe in yourself when no one else will.  When no one else wants to.  Even when your friends change on you.  Even then you must still believe.

For those that follow me on social media, you know that I was given the gift of this amazing promotional VIDEO from dear friends and fans.  I didn’t ask for it.  It was given to me as a thank you for what my book has done and continues to do for them.  And as I continue to receive this and other small (and large) blessings, it’s always the same.  Some share my excitement as if it is their own, while others turn their noses up with jealousy and envy.  For years I’ve not addressed it head-on, because there really is no need to feed negative energy.  But today I’m feeling a little different.  Today I want to speak to the haters as I quote me from my new book, Still Standing.  For those that have a copy, you can follow along with me.  I’ll be starting at the bottom of page 51…

I’m only talking about those special few whose colors seemed to change over the course of time. Here’s the deal: they’re excited for you as long as you’re not doing better than they are. There – I said it. They will high-five you, pat you on the back and congratulate you as long as you’ve not eclipsed them too badly in this marathon of life. They’ll even throw you a party if you surpass them a bit; as long as your coattails are still within arm’s reach. But the moment you turn a lap, get your second wind and start sprinting like there’s no tomorrow you can almost kiss your buddy goodbye. You’ve left them; they feel like they’ll never be able to catch up and now they want nothing to do with you. Your success, no matter how large or small, holds a mirror to their face showing them who they could be and what they could have if only they worked hard enough…were dedicated enough…were focused enough…were determined enough…were disciplined enough… All of a sudden you’ve proven the impossible to be possible and though it appears so, they’re not actually upset with you – they’re angry with themselves. These were hurdles they assumed you’d be jumping together, but you got ants in your pants and jumped the gun on a few of them, leaving them behind. And what they fail to realize is that even though you’re a few laps ahead, you’ve still got their back; you’re still cheering them on; you still want to see them succeed, but they’re too busy pouting to even see that. It’s such a sad situation. Every year thousands drink haterade and scores of friendships dissolve because of it. My advice to those who have lost a buddy or two along the way? Never stop making new friends. As you climb new towers and reach new heights introduce yourself to the new bunch around you. They’ll be excited to hear how you got there and they’ll be ready to cheer you on to your next stepping stone, because they’re headed in the same direction.

A sincere “thank you” to all that have my back, that love me unconditionally, and that root for me even when I can’t seem to root for myself.  I love you all dearly.  To everyone else…I hope you don’t choke on your haterade.

My name is Jasmynne Shaye, and this is me STEPPING ON A FEW TOES.

Interested in getting a copy of the book?
Go to AMAZON for hard-copy and Kindle versions or click HERE to purchase an autographed copy.
Posted by Jasmynne Shaye at 6:31 PM 0 comments

Email ThisBlogThis!Share to TwitterShare to FacebookShare to Pinterest
Labels: drink, haterade, in spite of you, Still Standing, video 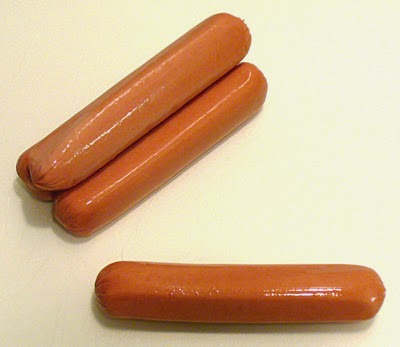 So I’m sitting on a fairly empty subway.  In my immediate area there is only a Caucasian woman sitting across from me enjoying her newspaper.

At the next stop I hear footsteps enter our area, but I’m much too involved in my game of Candy Crush Saga to bother looking up.  I do, however, get a very clear whiff of marijuana and all I’m hoping is that the culprit doesn’t sit next to me.  There’s nothing worse than getting skunk stuck in your hair – I have places to go.

Uninteresting.  So I dig back into my game:  bring down all the ingredients.  Candy Crush, you are not about to make a fool of me.

Male 2:  “Dude.  I was over this girl’s house last night and she had 2 packs of franks.  And, dude, I ate 13 franks.  And when I was about half-way through the first pack I looked over at her and she had this look of complete disgust on her face, like ‘Are you really eating Nathan’s franks like this at 2:00 in the morning?’”

This is where I burst out laughing and Male 1 looks over at me and begins to chuckle.  I looked up to notice that the newspaper reader is also smiling.

Male 2 continues:  “Dude, I think she was most upset that I had the audacity to be eating her franks in her house and without even bothering to offer her any.  So I said, ‘Would you like a frank?’ and she said, ‘Absolutely not.’  So, dude, I kept eating.”

By this point there really is no hiding my laughter, and I can forget trying to concentrate on Candy Crush.

Male 1 is whaling with laughter.

Male 1 is now stomping his foot in unison with his gut-wrenching laughs.

Male 2:  “Dude, after I’d eaten all of the buns I started eating the franks with her rye bread.  Dude, the brown one with the swirls.  It’s disgusting, but it was so delicious with the franks at that time.”

Me and Male two share a glance in between laughs and the train stops at Columbus Circle.

Male 2:  “Dude, I’m gonna keep calling her.  If she gives me another chance the first thing I’m gonna do is take her some more franks.”

I burst out laughing and the newspaper reading is hunched over in a fit, as both males exit the train.

Only in New York.

Won’t You Join Me?

Now that the dust has settled a bit, I’ve had a minute or two to reflect and process the events of this past weekend and I’m still blown away – and for so many different reasons.  First off…I’ve PUBLISHED MY FIRST BOOK.  What?!?  Who in the world do I think I am??  What in the world do I think I’m doing??  My goodness.  I think perhaps I’ve surprised myself with this one.  This was not in the plans.  It was never a goal of mine.  Even still, a manuscript was written and Still Standing is the result.  Wow.  Note to all reading this post:  believe you me…ANYTHING is possible.  Even those things that you haven’t completely thought out yet – even those things are possible.  Even the things that you keep getting ready to get ready to do.  Yep.  Even those things are possible – if you’re willing to work.  Make no mistake about it, none of it comes easily and every bit of it is the result of focus, determination, dedication, and boatloads of drive.  But that’s not what I wanted to write about today so let’s just stick a pin in that for the moment.

Not only have I published my first book, I had my official book release in a Manhattan bookstore and the house was packed.  Ok, those are all good things, but what I’m most excited about is the reception.  Still Standing was received with open arms, hearts, and minds.  After the show I was greeted with far more warmth, kindness, and adoration that I ever expected.  An extremely humbling experience, indeed.  It really was.  And to take it a step further than that…I had family drive up from North Carolina to attend the event.  I had a cousin drive in from DC to attend the event.  And I had a North Carolina Facebook friend attend so that we could finally put faces to names.  It was super incredible and a totally jaw-dropping experience for me.  I had supporters come that I’d only met and seen one time before, and then there were many dear friends who wouldn’t miss it for the world.  For sure it’s one of those things that I will never forget.  That – I’m certain of. 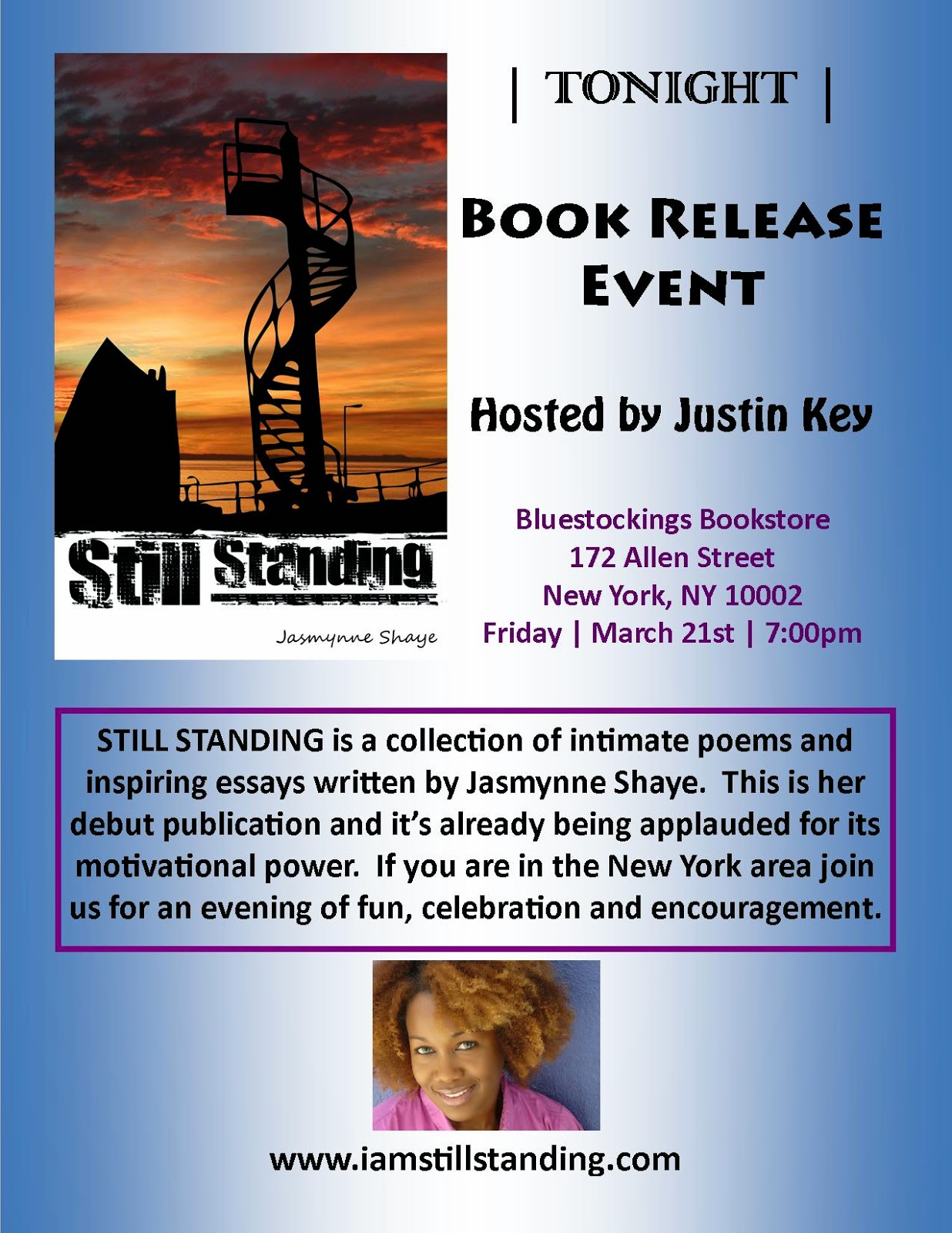 Hello, gang.  My posts are few and far between these days.  Perhaps you can now understand that I went MIA in the blogosphere in order to work on STILL STANDING.  Can you believe it??  Yours truly can officially call herself a published author?  What in the world, right?  Who would have ever thunk such a thing to be possible??  Certainly not I.  Certainly not the chica that couldn’t seem to write a paper to save her life whilst in college.  Certainly not me.  Well how the hell did this happen??  It’s funny…I can now think back on the sequence of events and it unfolds just like any story told on the big screen.  Lord knows I had no clue, but God knew what He was doing.  I was always meant to write STEPPING ON A FEW TOES, and I was also destined to write STILL STANDING – all the while professing to others, “I’m really not a writer.”  Hahahaa…  Well let me tell you; I stand corrected.  With all the pride, assurance, and confidence in the world I can boldly tell you:

Jasmynne Shaye is an actor, a writer, a public speaker, a nutritionist, a child’s rights activist, a life coach, and a girl that refuses to quit.  That’s me.  And I’m damned proud of it.

Tonight at 7pm, will be the official unveiling of STILL STANDING, and I could not be more excited.  I landed in New York City December 4, 2012 and on December 18, 2013 STILL STANDING was officially published.  Boy oh boy…God is such a trickster.  What a magician this fella’ is…and all I can do is smile.

I’m so grateful, ya’ll, I really am.  I just a girl that came from absolutely nothing.  I don’t have famous parents.  We were dirt poor when I was a kid, and I saw and experienced things that no child should ever have to go through – even still I stand (well I’m sitting at the moment) before you seemingly put-together, and not falling apart at the seams.  Hear me when I say that when shit was hitting the fan (and everything else) it was my dreams that held me together.  I refused to believe that God would allow any of those things to be the ending to my story – I just refused.  And because I’m so dog’on hard-headed and stubborn, I pushed through, and kept on pushing until…well until I found myself here.  And I’m not done pushing.  I have no idea where my road will take me from here, but I thought I’d take a moment to hop off my bike and let you know how everything is going.  I honestly could not be happier.  Thank you to all those out there that have continued to support me through the years, it truly means so much – seriously, it does.

Now, I’m gonna climb back on my bike and get to pedaling because I’ve got places to go.  My first stop???  You already know…

TONIGHT IS THE NIGHT!!

Other Sites to Check Out

Welcome to the World of S.O.F.T.

Many have asked, so now I’m telling. Stop here to get details on just how the heck I’m making this thing happen.